Located in the Dominican Republic, Casa de Campo opened in 1974, and the sprawling 7,000-acre resort is one of the world’s best. With three stunning Pete Dye designed courses, water sports, shooting, tennis and even polo – on horses as well as in the water – there’s more than enough going on here to keep everyone happy. But there’s one thing at Casa de Campo with a bark as well as a bite and that’s Dye’s Teeth of the Dog. Its beauty is reminiscent of California’s Pebble Beach thanks to its stunning vistas and dramatic pacing.

Teeth of the Dog at Casa de Campo Resort

It was back in 1971 that Pete Dye’s aptly named Teeth of the Dog set the bar for a new generation of golf courses in the Caribbean islands. To date, few courses have matched the oceanside splendour and fabulous design features of this magnificent layout. The seven holes played directly alongside the ocean (and some over it), have tested and thrilled all who play here. The short, challenging and exquisite par-3 5th, is one of the Teeth’s most photographed holes, with its seemingly postage-stamp green surrounded on three sides by the azure waters of the Caribbean. This gem of a par-3 starts a run of four oceanside holes, all of them immensely scenic, any one of them capable of giving your score a serious bite. The par-3 7th provides as scenic a spot to tarry a while as you’ll find anywhere in the golfing world.

On the back-nine the oceanside stretch embraces the par-4 15th, par-3 16th and par-4 17th. If the prevailing sea breeze is blowing, drawers of the ball may need to hit out over the ocean to see their ball come back from right to left onto dry land. With the greens hanging out over the ocean, all three of these holes demand top quality approach shots. When not alongside the seashore and its jagged, teeth-like coral rocks, the course assumes a calmer, more resort-style persona, although Dye’s prodigious mounding and bunkering around the often elevated greens will continue to emphasis great approach work and an excellent short-game.

After the renovation work in 2005, Teeth of the Dog now measures a whopping 7,350-yards from the tips, so you are well advised to select your tee box most carefully. “Now accepting challengers” as they say.  No golfer, regardless of skill level, should miss the chance to play the most renowned course in the country.

Teeth of the Dog: ranked by Golf Magazine as one of the top 50 courses in the world and #1 in Latin America

Dye Fore may be overshadowed by the Teeth of the Dog but should not be overlooked. Let’s talk numbers: 27 holes; 7,740 yards long; 7 scenic cliff-side holes dropping 300 feet to the Chavón River below; and breathtaking 360 views. By our calculations Pete Dye’s masterpiece, Dye Fore golf course, has a winning formula. Characterized by spectacular views of the Dominican mountains, the Chavón River, the Marina, and Altos de Chavón, this challenging cliff-side course is a delight for players of all levels.

The original 18 holes, the Marina and Chavon nines, opened in 2005 and were designed by P.B. Dye. The new Lagos nine, opened in 2011, is the least visually explosive of the three loops on Dye Fore, but it doesn’t lack for dramatic shot values (it was built more for member play). Lagos is a virtual swimming pool of water. The 300-foot cliffs of the Chavon nine overlook the winding and scenic Chavon River. Both its par 3s fly across ravines choked with tangled jungle right along the cliff’s edge. They’re beautiful holes, although not when compared to the mesmerizing moments of the Marina nine. Golfers standing on the elevated tee boxes of the fourth and fifth holes stare beyond the mouth of the river to the Caribbean Sea.

Another Pete Dye design, The Links was completely overhauled in 2012 to make it every bit as challenging as the other courses at Casa de Campo.

Dozens of fairway and greenside bunkers of all sizes and shapes catch sloppy shots. Five straight holes on the back nine (nos. 12-16) interact with inland lagoons. With water lurking, the tee shots of the 178-yard 13th and 167-yard 16th holes feel like the most dangerous swings of the day. If you can’t score on the Links, good luck on the Teeth. 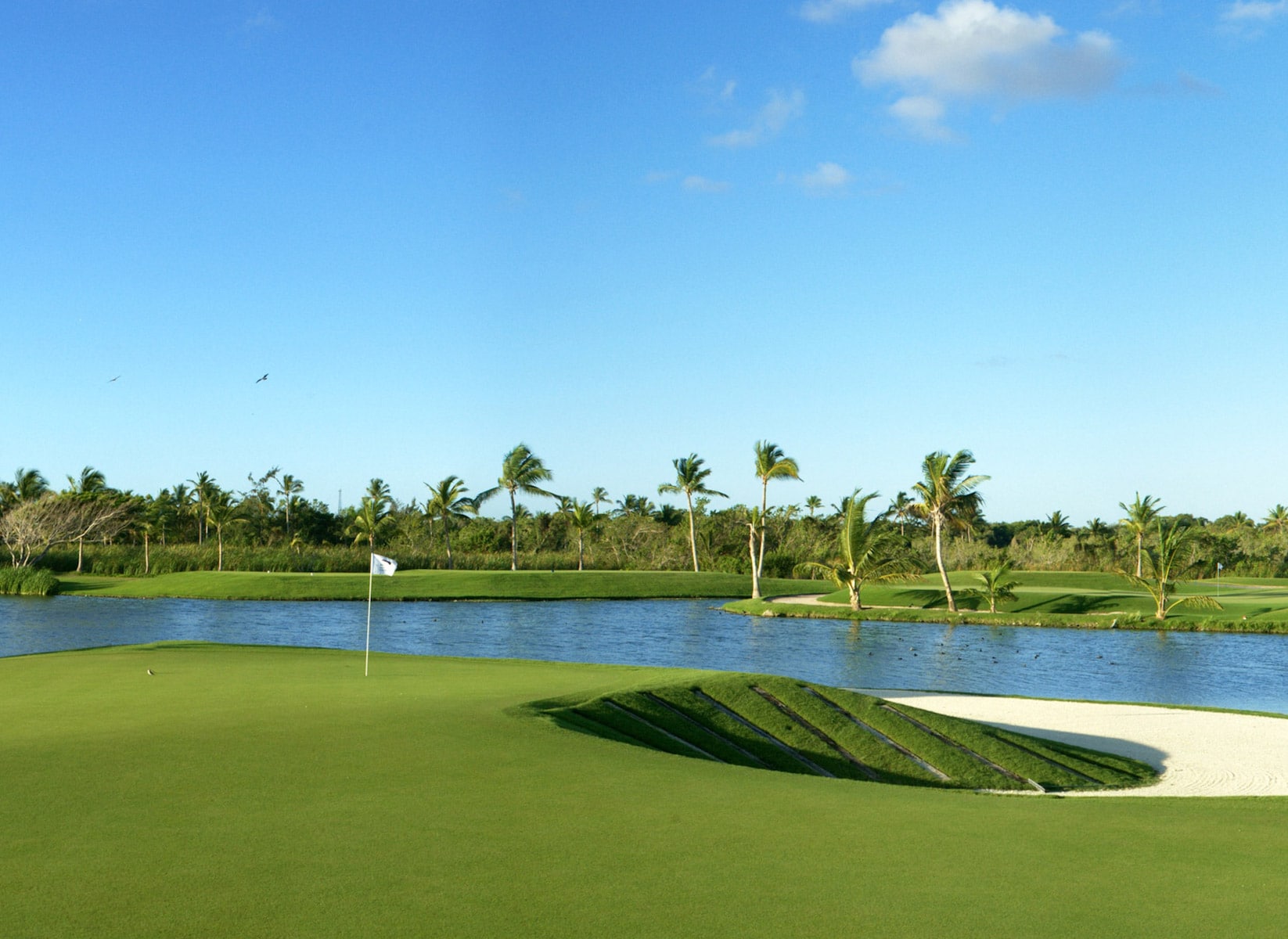 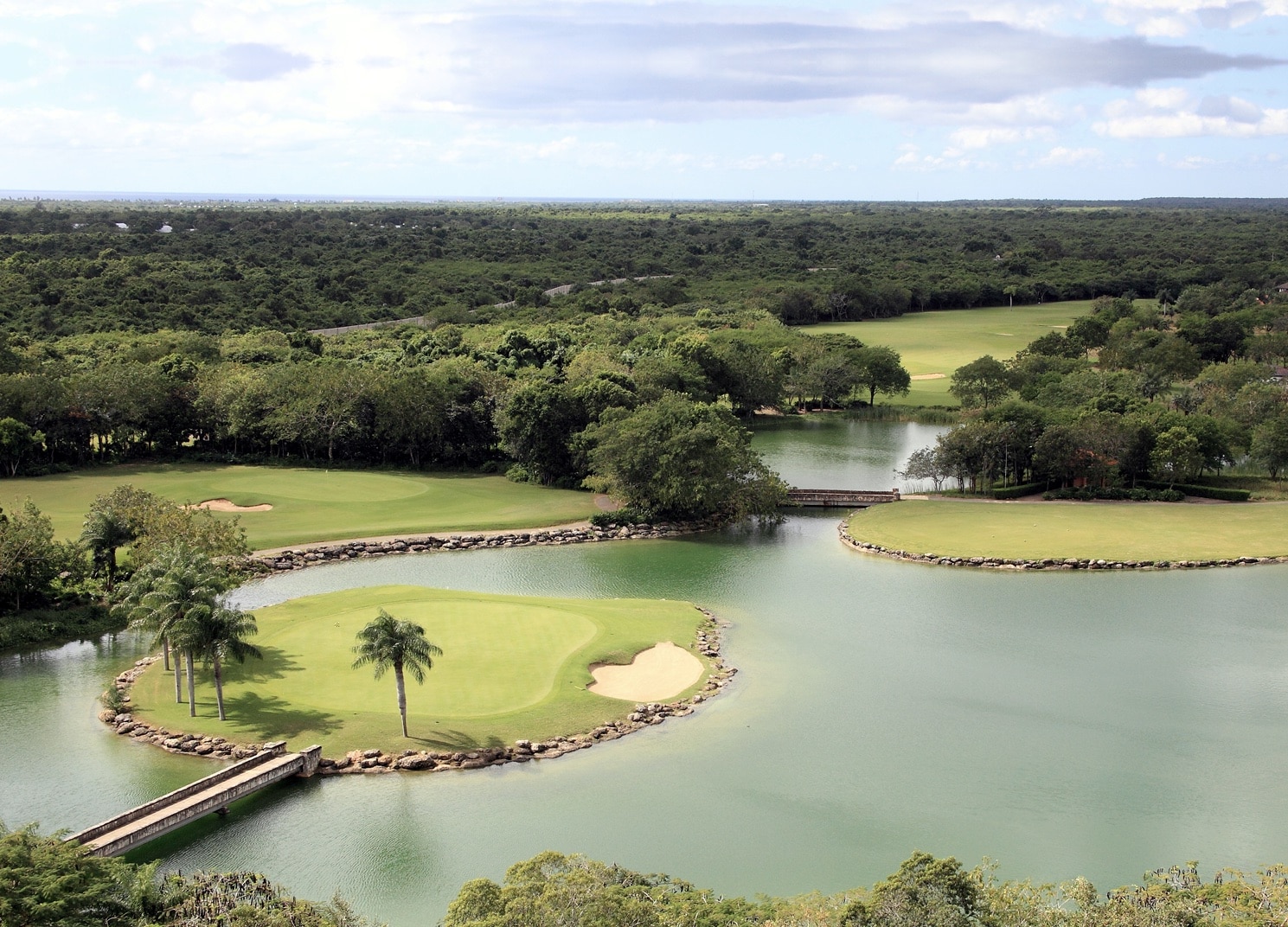 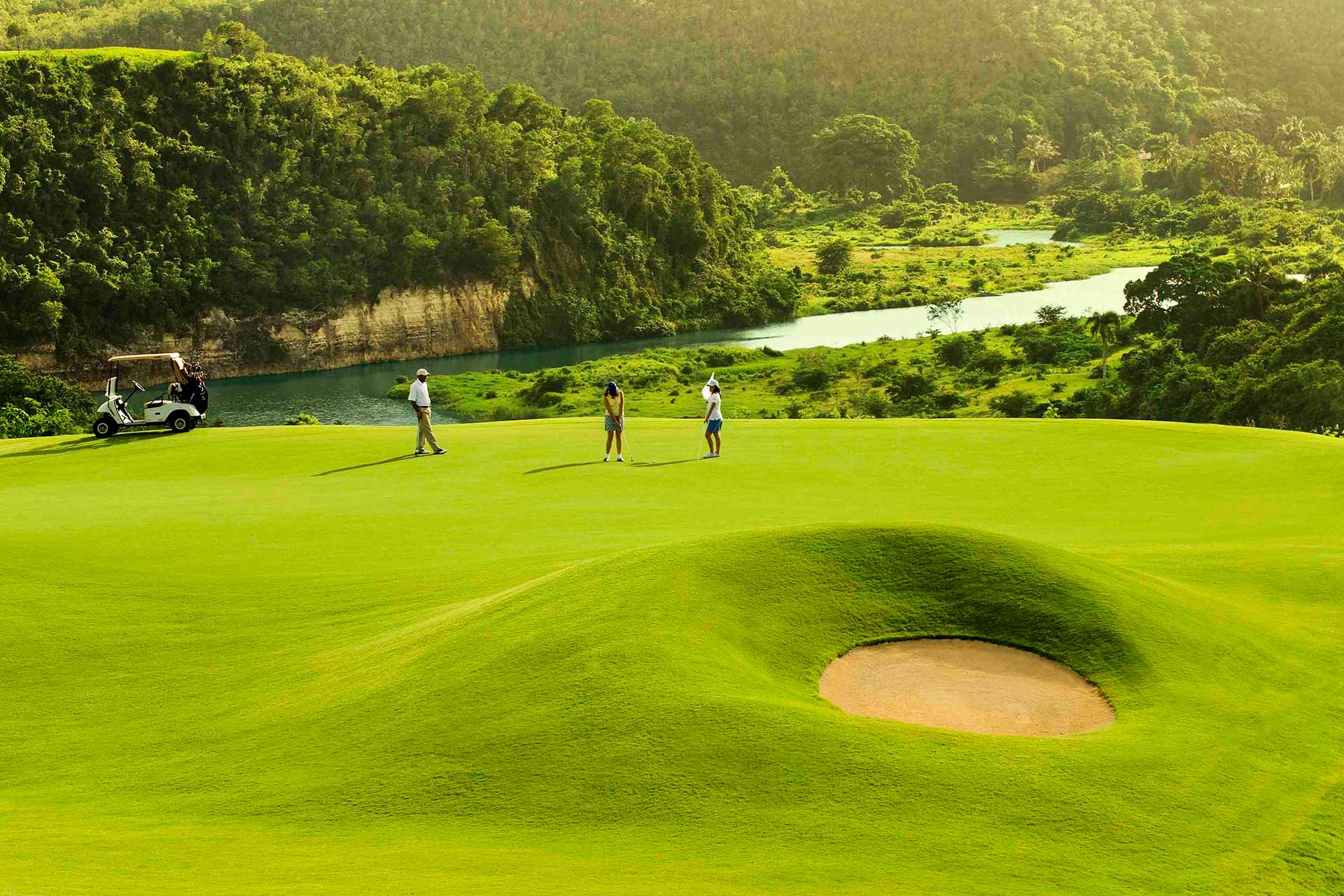