Ria Bintan Golf Club is a 27-hole championship golf course designed by Gary Player. The 18-hole Ocean Course and the first nine holes of the 18-hole Forest Course opened for play in October 1998 and December 2000 respectively.

The Ocean golf course at Ria Bintan offers two distinct playing atmospheres. For the most part the course cuts through the native jungle of Riau, a lightly populated part of the Indonesian archipelago. You are more likely to come upon monkeys, small deer or wild boar than other humans. It also has its seaside holes and, with their traditional lure, it is probably these holes that will be best remembered by visiting golfers. In an experience somewhat akin to the way in which the sea is unmasked at the 6th at Nirwana Bali, here at the par five 7th the sea is revealed to the golfer halfway down the fairway. From here you get closer to the sea via the short dogleg 8th and then play along it at the par three 9th. This hole, whose photograph appears on most of the club’s materials, requires a medium iron played parallel to the beach to an archipelago green. The last touch of the sea is felt at the par four 10th where you descend almost to the same level as the sea itself and play along beside the beach. The waves here are benign and you don’t experience the exhilarating thump of surf that characterises the beaches on the western shores of Bali.

There are also some internal water features on the course – the first five holes play their way around a large lake – and the four holes from the 11th are grouped around another lake. Individual ponds add feature to the closing three holes. I’m of the view that there is more artificial water on this course than there needs to be. The semi-hidden pond on the left side of the 1st is a bitter pill for the golfer that hooks his first shot. The body of water that runs along the right flank of the par four 4th hole renders the steeply downhill tee shot even more difficult. Completed in 1999, Ria Bintan’s Ocean Course has now bedded in properly and the conditioning and presentation of the course is the best in Indonesia and is as good as the best courses in nearby Singapore. From the medal tees the course is long enough to keep the par fives honest and it at its full extent the course measures 6,470 metres.

A good score at Ria Bintan is going to hinge on playing the par fours well. This is a well-bunkered course, as you would expect in a course designed by Gary Player. The bunkers are well located but not too intrusive and fairly easy to escape from. The shape of the greens permits wide scope in the challenge of the pin settings. The greens are on the fast side and very consistent in their roll.

The tougher parts of this course lie in the opening and closing holes. The above mentioned water is not the principal hazard at the par five 1st, and only a truly bad shot will find it. The fairway is split in two and the water runs along the right side dissuades you from an attack on the green. However there is no easy lay up. A pulled shot will land in one of the three bunkers that guard the left of the fairway. In that event the golfer faces a long bunker shot with the lake on view directly behind his or her line. The second is a very short par three where a single large bunker cut into the centre of the green will have some bearing on your line of attack. Despite its short length, the water that runs up the par four 4th will prey on the mind and its influence carries through to the second shot even if water is avoided from the tee.

At the other end of the course, the 18th ranks as the toughest par on the course. The stroke index of 6 understates its menace. A good tee shot will be both long and with some fade spin. The alignment of the green and gulley that protect it requires a draw shot for the second. A straight approach leaves no room for error. Even strong swingers of the club will often find themselves approaching this difficult green with a 3 or a 4 iron.

Although its the seaside holes that linger in the mind here, it is the difficult holes to the interior of the property on which the business part of any round is based. Part of Indonesia but close to Singapore, Ria Bintan is distinctly different. Singapore has some good courses but most of them are cheek-by-jowl to the noisy airport. In Java and Ball you never escape the press of people, even on the golf course.

The above article is from The Finest Golf Courses of Asia and Australasia by James Spence.

Ria Bintan’s Ocean Course conditioning and presentation is the best in Indonesia and is as good as the best courses in nearby Singapore. The course measures 6,470 metres from the championship tees.

The other course at Ria Bintan Golf Club is the Forest Course. A 9 hole Par 36

Ria Bintan Golf Club has made it to the official ranking of the Top 100 golf Courses published by Golf Digest Magazine. Ria Bintan Golf club clinched first winner awards in the Asian Golf Monthly Awards 2008 for Best Golf Course in Asia, Best Course in Indonesia and Best Par 4 in Asia. 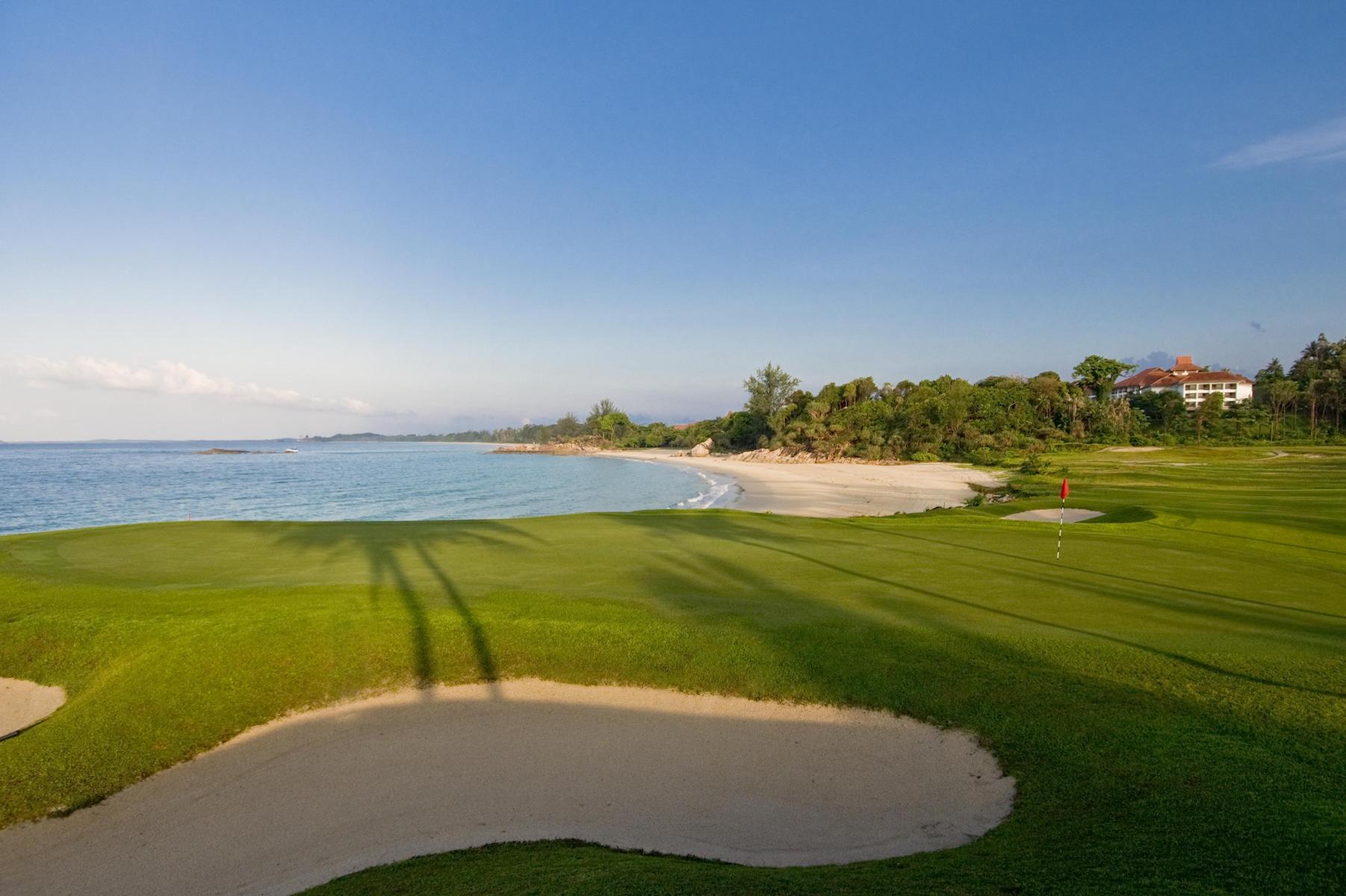 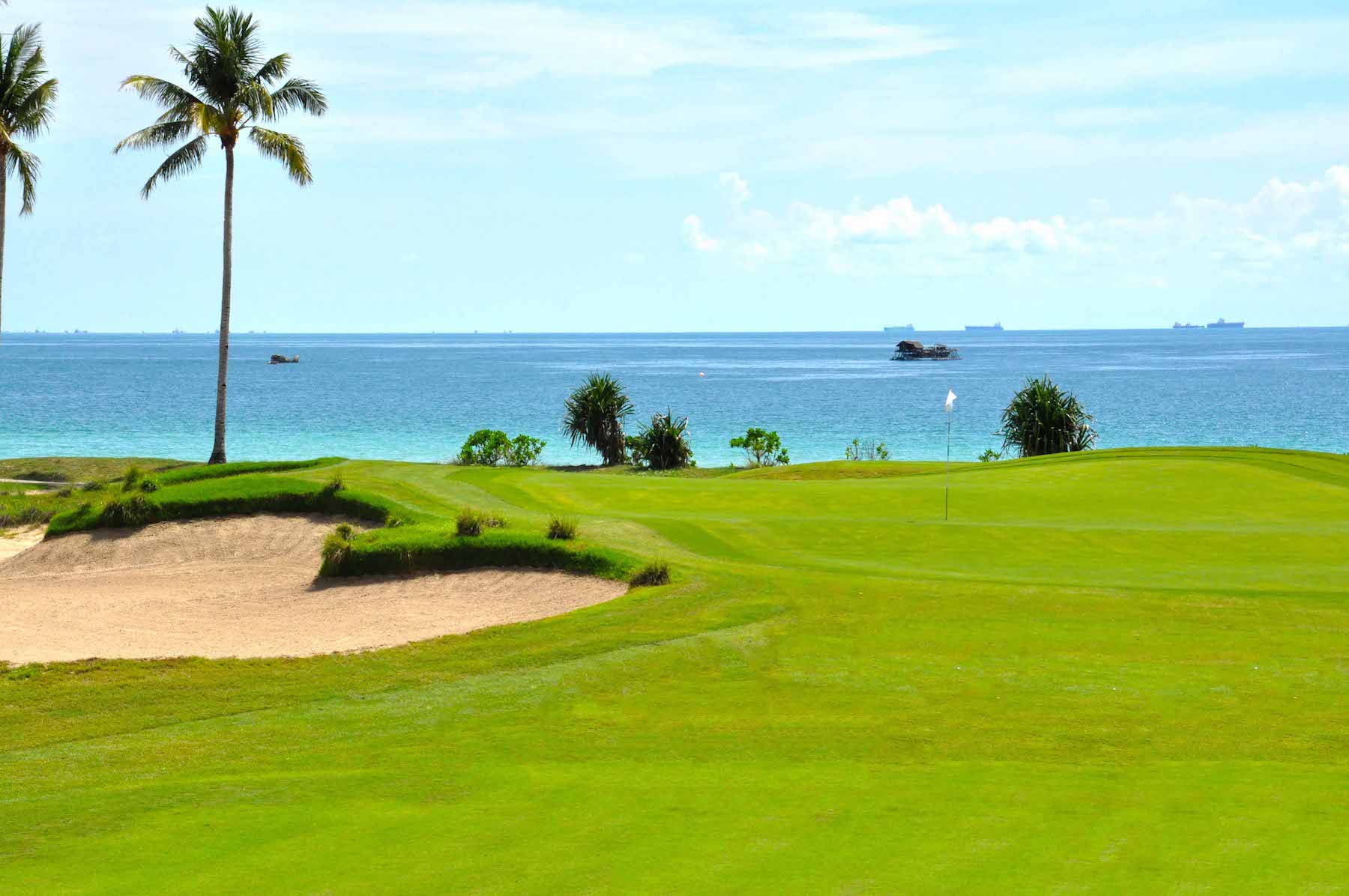