Vestmannaeyar Golf Club is located on the Vestmann Islands, which are situated to the south of the Icelandic coast and the largest of the islands is Heimaey, which is the only one inhabited. The island is well known for the sporting pursuits of cliff hanging, deep-sea fishing and golf, with the Vestmannaeya golf course located inside an old volcanic crater under steep cliffs.

The Vestman Island Golf is the third oldest in Iceland, founded in 1938 by 36 dedicated people.

To begin with, the small valley Herjólfsdalur, was the settlement for the first 6 holes.  Three of the original holes are still in use and those holes are the oldest golf holes in Iceland. Only year after a small clubhouse was finished in the east part of the valley and then enlarged in 1945.  In 1962 the course boasted full 9 holes.  National celebration in Herjólfsdalur forced the members to seek out new land south of the valley and in continuance of that a new clubhouse was built.

The old house is now used as a lodging cabin for travelers.  The catastrophic eruption in 1973 changed all plans regarding the new club house and the game of golf as volcanic ashes covered the whole course. Temporary course of xxxx holes replaced the 9 hole course until all ashes had been removed and that took full 4 years.  In 1989 a new elegant club house was built as an addition in 1973 decision had been made to add another 9 holes but that came not to reality until 1994.  The old course was left almost unchanged but the new layout was built on the seashore. The design is considered to be extraordinary in a magnificent surrounding where birds are in perfect harmony with the Atlantic ocean on one side and the rough shore on the other.  Sometimes golfers just forget that they are playing for score in this land of contrast.

Today’s 18-hole layout is a short but spectacular par 70, which measures 5,820 yards. The par four 13th hole is not overly long but it plays very tough indeed with out of bounds to the left. The landing area for the tee shot is a small, 30-yard wide ledge 220 yards away then the approach requires an uphill shot, normally played into the wind. The one-shot 17th is the signature hole which requires a 133-metre forced carry across rocks to a green that is protected by bunkers left and water at the rear. It’s an absolute cracker.

As Alister Nicol from GOLF MONTHLY wrote about the golf course at Vestman Island Golf “The Westman Islands course nestles in the crater of an extinct volcano and its scenery has to be seen to be believed.
It is golf, if now quite in the raw, the  just as I would imagine my Scottish forebears intended it to be. There are no obsessively manicured fairways here. But there are a series of spectacular holes which take one´s breath away.”

Note that a handicap of 36 is required to play at the Golfklúbbur Vestmannaeyja. There is a Pro Shop and a practice area on site. 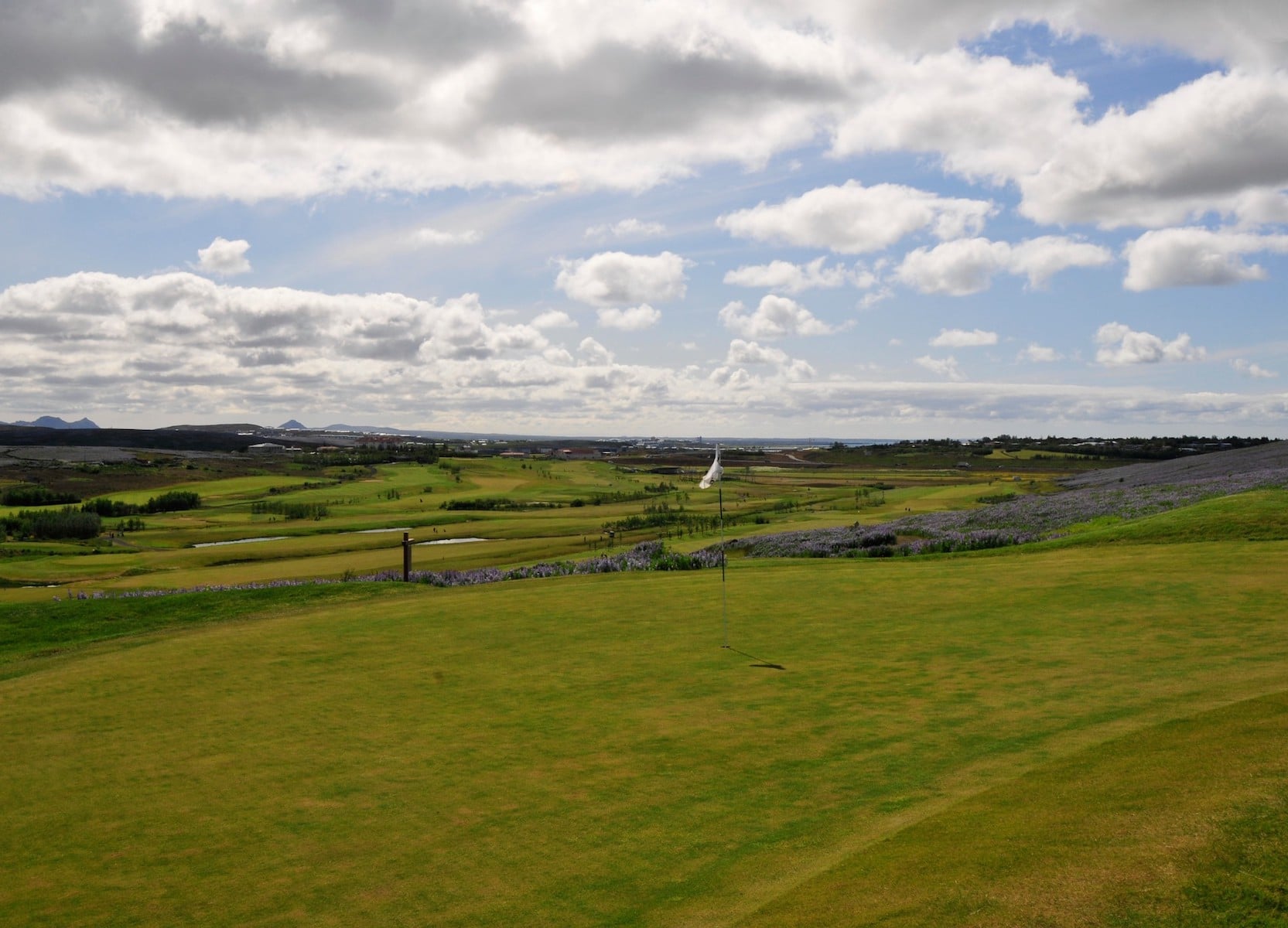 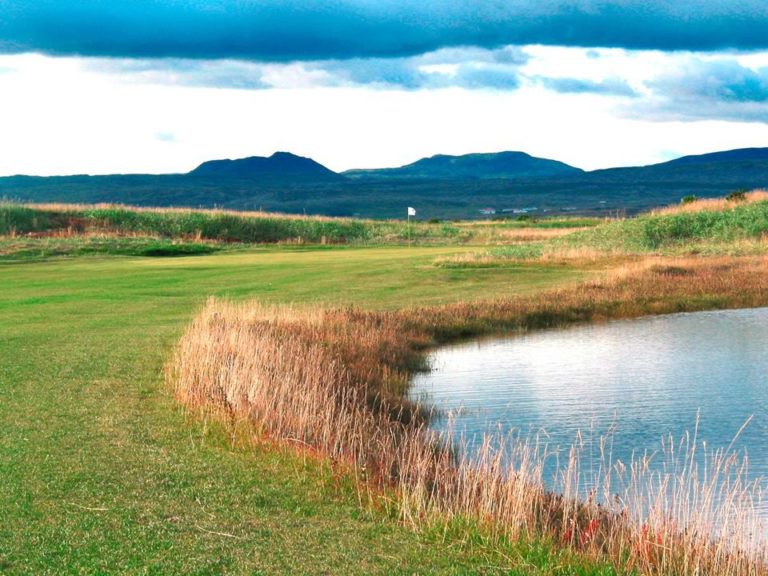 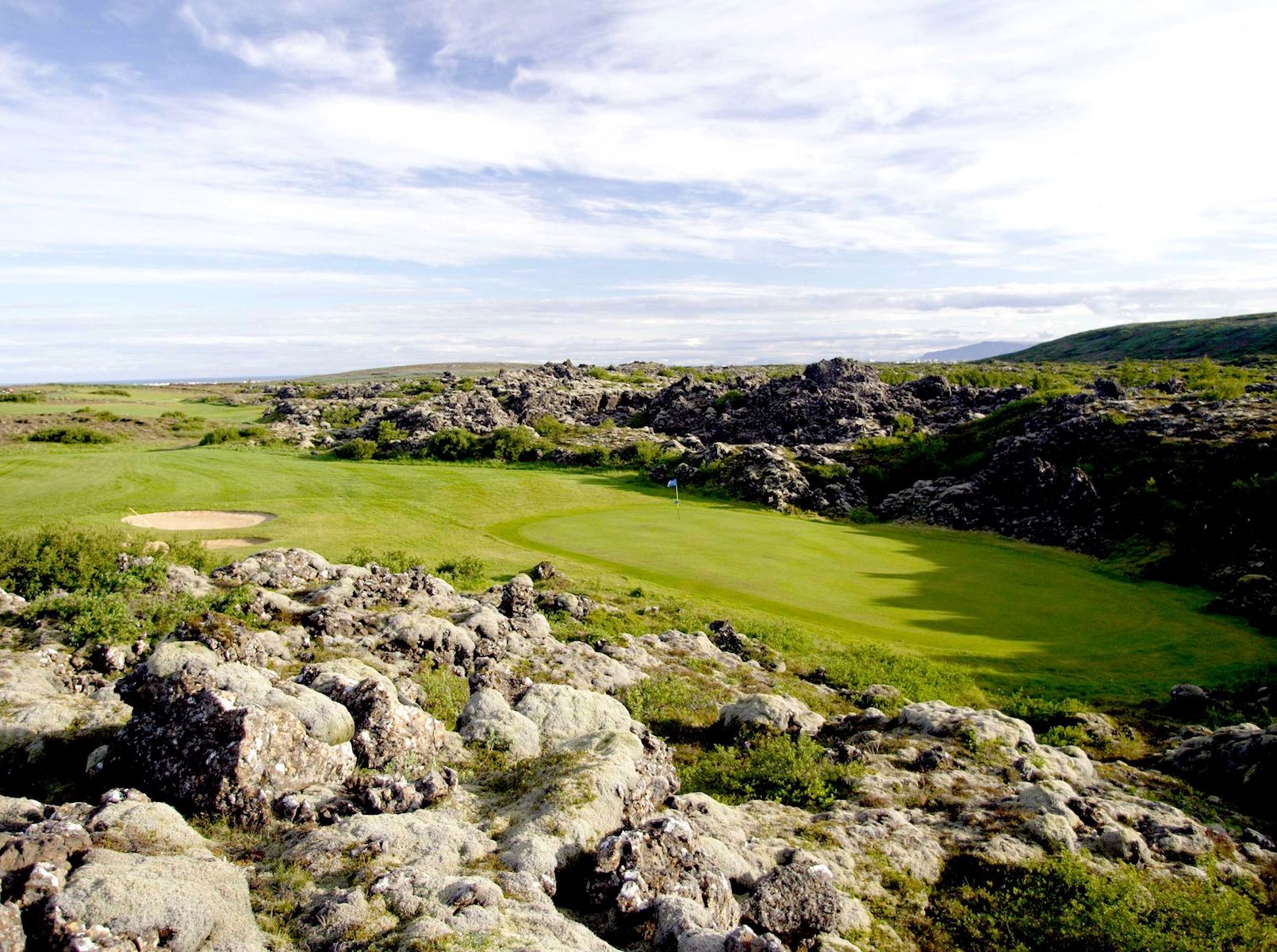