The members-only Golf de Joyenval club, located approximately fifteen miles outside Paris to the west, was one of Robert Trent Jones’ last designs. The setting is quite historical, for it borders the Marly Forest, which the French kings once used as their own private hunting preserve.

As often in some parts of France, the necessary clearance to construct a new course was hard to come by, and the club was not opened until 1992.

In the pure tradition of Robert Trent Jones Snr, carved bunkers surround the often-raised greens, whose undulations and speed provide a stern test for even the most proficient putters.  Marly, enclosed in a magnificent natural setting, is a technical course demanding excellent shot-making skills.  In the summer months, high natural rough lines the fairways, giving the course a links-style appearance and punishes wayward drives.

The large double green shared by the 6th and 17th holes, evokes memories of St. Andrews.  Covering 26,900 ft2 you may experience putts of up to 165 feet in length.
The 10th/11th/12th holes make up Joyenval’s equivalent of Amen Corner.  The beautiful par 3 eleventh hole, played from an elevated tee, looks over ancient outbuildings of the estate, plus the imposing lime tree that forms the Club insignia.  The path from the 11th green to the 12th tee winds through the ancient Joyenval Abbey, originally constructed in 1224.

The signature 18th hole is a strong par 5,  with the clubhouse providing the perfect backdrop. A total of 10 deep bunkers and a two-tiered green provide Marly’s final golfing challenge.insert text

Retz, running partially through the forest, offers a more rustic golfing experience whilst maintaining the same level of manicuring as its sister course.  Whilst playing Retz, it is easy to forget that you are only 20 minutes from the capital.

Robert Trent Jones Snr designed Retz on the site of the ancient ‘Désert’, so it can appear wider and perhaps more forgiving, off the tee than Marly.  However do not be fooled, the signature bunkers, undulating greens and zones of high rough are very much present and need to be respected in order to return a good score.
Holes 4 and 5 weave through the forest, requiring both precision and length in order to secure a par.
The 6th hole is bordered by the Ru de Buzot, which snakes through much of the course and creates a series of wonderful, natural water hazards.
The par 3 11th is considered by many as the toughest hole on the course, especially from the back tees.   The mirror-lake in front of the devilishly difficult green could easily draw comparisons to Augusta in the springtime.

Natural gravel paths have been discretely constructed on Retz, allowing the use of golf buggies in all but the most inclement weather conditions. 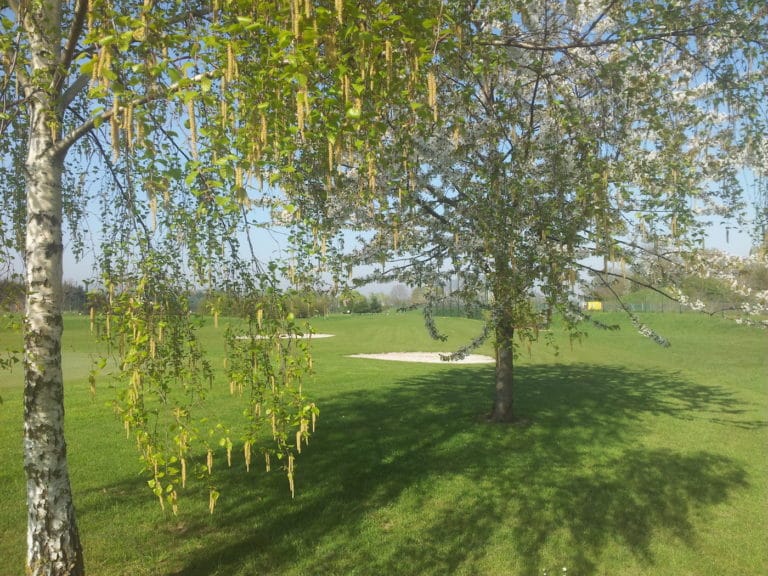