Stallion Mountain Golf Club was originally a 54-hole facility named Sunrise Golf Club when it opened in 1991.  Several years later, the owners decided that the land was worth more to the housing market of the early 2000’s boom and reduced the course to what they considered their best 18 holes of golf.  The recession that hit the country in 2008 sent the Golf Club spiraling, but the new owners have now resurrected the once great facility and brought it back to life.

The original design of Stallion Mountain (Nevada) was done by Jim Colbert and Jeff Brauer, as Lee Schmidt and Brian Curley modified it into one course in 2004, adding tiered fairways, dramatic green complexes and plenty of deep bunkers and water hazards.  Accuracy and length off the tee are necessary skills if you want to score well at Stallion Mountain and the greens can prove tricky for those lacking a solid short game.  Four tee options are available, allowing players a nice amount of options when it comes to catering the course to their skill level.

For the tour of the course, let’s start right out with Stallion Mountain’s first, a 428 yard Par 4.  The hole plays straightaway and is guarded by a series of fairway bunkers both on the left and right.  These bunkers can be carried with a decent tee shot.  Homes and OB line the right side of the hole to the green.  There is a large, lone greenside bunker on the left of the putting surface.  Hint: Use one extra club or you will find yourself chipping up and on in hopes of saving par.

The second hole is the first Par 5 at a length of 560 yards.  A straight tee shot is needed in order to avoid the big bunker on the left and to avoid the rocky gravel on the right.  Big bunkers line the right side of the fairway for those who decide to lay up or go for the green in two.  There is a grassy collection area left of the green which isn’t a bad area to miss since the slightly elevated green slopes severely from front to back.

The 3rd is a challenging 213 yard Par 3, with water starting just in front of the tees on the left side, continuing all the way to the green.  Three small bunkers line the right side as you approach the green along with one centered behind the green.  The green narrows as it climbs the small tier to its rear.  The green banks slightly, back to front, helping it to receive incoming shots quit well.

The fourth Stallion Mountain Golf is a 448 yard Par 4 dogleg left with a couple bunkers on the left side of the fairway.  Long hitters can try and cut the corner over the bunkers to a slightly downhill grassy area for a mid-iron into the green.  The green is surrounded by a large bunker on the left, and two smaller bunkers, one on the right and one in the rear.  Aiming for the middle of the green on this hole is the smart play for a par.

Par 3’s are the nemesis for many golfers and Stallion Mountain offers another good one at #5.  Six bunkers highlight this 230 yard Par 3 along with a grove of Russian olive trees, short right.  The long, narrow green is accentuated by lots of little ridges running from its edges as it slopes back to front.  This challenging Par 3 is one that will have you smiling if you walk away with a par.

Hole 6 is a reachable, 535 yard Par 5 from tees that are elevated, giving you a good view of the straightaway design.  Two fairway bunkers guard the right side at the 260 yard mark, making them tough to clear.  There are homes to the right and trouble to the left, so accuracy is key to scoring low.  The approach narrows, but if you keep it left, away from bunker front right, you can run it up and on.  The green angles right to left and offers a false front, middle right.  A back left pin placement can be a little tricky.

The seventh is a 416 yard Par 4 that has a ravine along the left side of the hole that leads up to just short of the green.  Four greenside bunkers protect the putting surface that slopes from back to front.

The eighth is a solid golf hole measuring 425 yards from the back tees.  Water starts on the left next to the tees and lines all the way down to the greenside.  The hole design forms a slight dogleg left with the water routing the hole to the right in front of the green.  There is a fairway bunker on the right side in the landing area, about 250 yards from the tee, with the fairway offering a lot of subtle slopes, requiring you to make good contact on your second shot in order to get it close.  A large bunker guards the right, greenside and another is placed at the rear.

The ninth is a great challenging hole, guarded by two big fairway bunkers in the landing area and by water approaching the green.  At 452 yards from the tips, this hole requires you to hit a couple of your best shots of the day!

Your back nine at Stallion Mountain Golf starts out with another of the great Par 4’s at Stallion Mountain.  This slightly doglegging right hole again requires two well placed shots to reach its 449 yards.  A short forced carry presents itself from the tee to the fairway that slopes right to left and a road to the right which is OB.  There is a bunker on the left at about the 290 yard mark and will catch plenty of tee shots for the longer hitters.  There is a bunker left, slightly away from greenside and another pot bunker back right.  Adding to the difficulty of your second shot is a pond behind the green.  The putting surface is one of the smallest on the course and is slightly elevated.  Starting off with a par on this back nine is an exceptional score.

Number eleven plays as the shortest Par 3 on the course.  At 166 yards from the back tees, an accurate shot is needed in order to avoid the pond left and a greenside bunker to the right of the green.

Here we have another tough Par 4, the straightaway, 428 yard twelfth.  It is lined with desert terrain both left and right and has another one of those perfectly placed fairway bunkers on the left at about the 250 yard mark that is just barely visible from the tee.  The rolling fairway adds another degree of defense to this solid Par 4 as it runs parallel to hole No. 1, but in the opposite direction towards Sunrise Mountain to the east.  There is a large bunker just short of the green left and can offer you one of those torturous long bunker shots to a green that slopes back to front with three tiers.  The twelfth is one of those holes that doesn’t really look that hard, but can create a big number if you let down your guard.

The thirteenth is a 549 yard straightaway Par 5 that that requires a straight shot from the tee to avoid a fairway bunker on the left and right.  There is a lake that runs along the right side of this tight fairway and can easily catch the slightest mishit tee shot.  Long hitters can attack this green in two although playing it as a three shot hole isn’t a bad decision.  Three greenside bunkers guard the green that stretches from the front right to the back left.

Hole fourteen is a 405 yard Par 4 in which long hitters can set themselves up for a birdie.  There is a fairway bunker on the left side about 230 yards out from the tee, but those who carry it can have a rewarding mid-iron/wedge shot into a big green.  A couple greenside bunkers guard the front and right side of the slightly elevated putting surface.

The fifteenth is another short Par 4 measuring at 407 yards from the back tees.  It is a slightly uphill tee shot to a dogleg right split fairway with bunkers in between leading up the green.  The play on this hole is the left side of the split fairway to avoid the bunkers and a blind second shot into the green.

The sixteenth is long, narrow Par 4 measuring 436 yards from the tips.  Fairway bunkers are placed on the right at the 240 yard mark and on the left at about 280 yards.  The fairway then falls off to the right side of the fairway near the 130 yard area to the green.  A giant bunker starts some 80 yards short of the green on the left and continues to almost greenside.  The long, raised green comes to a ridge in its middle and then gently slopes away to its back.  This just might be the toughest hole on the course.

The seventeenth is the last of the superb Par 3’s as it stretches to 218 yards from the back tees.  No matter the tees that you choose to play, you will have a total carry over water to the green, and even sometimes straight into nasty southern wind.  The green is wide and jets out to a point in the middle, back with a bunker on both sides in the rear.  The green doesn’t tier, but slopes considerable from back to front.  You had better have one of your best swings of the day left for this great Par 3.

The finishing hole at Stallion Mountain is its longest, lengthening out to 566 yards with plenty of obstacles to navigate on your way to its finish.  A long pond starts on the right about 140 yards from the tees and continues all the way to greenside.  Four bunkers dot the left side at about the 290 mark as the fairway gently swings to the right.  The fairway narrows as you approach the green, putting a premium on accuracy on your second shot.  There is another of those tough-distance bunkers at the 86 yard mark to the green on the left and another almost greenside. The green is one of the largest on the course and although it doesn’t form a tier, it is definitely influenced by a swale in its middle on the right side.  An excellent finishing hole to a great round of golf.

To resume Stallion Mountain Golf course is a spectacular 18 hole golf course that you have to play. 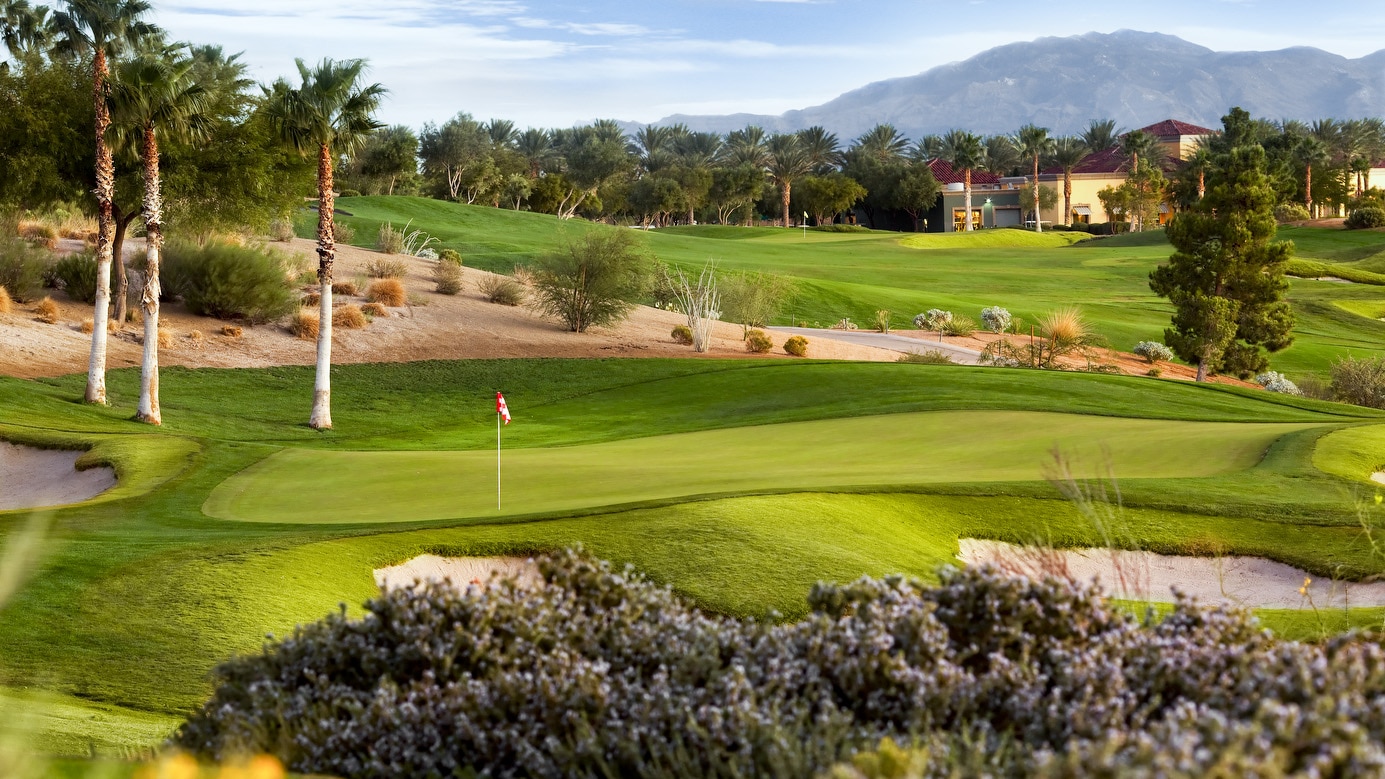 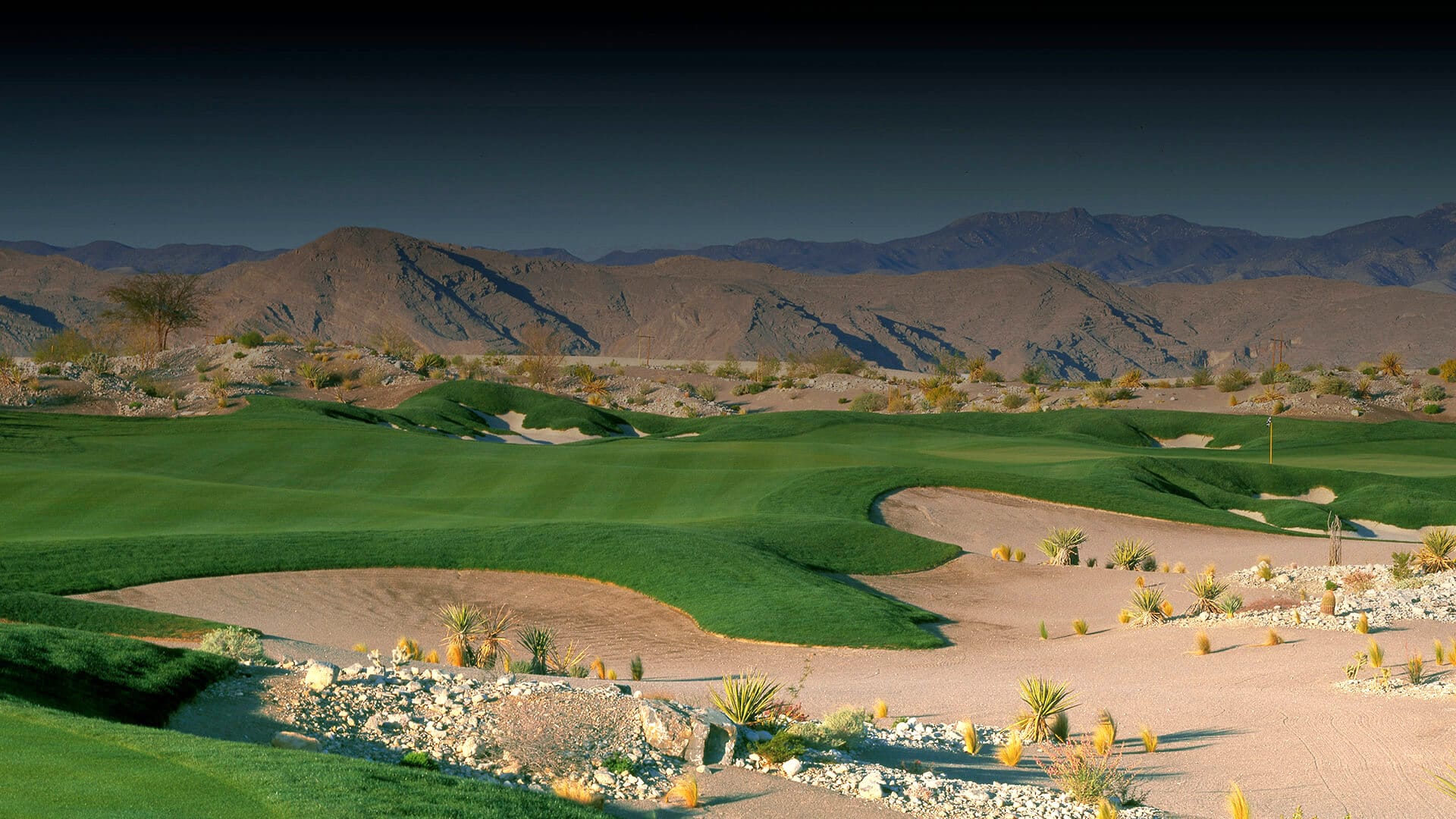