Situated on the lower north coast in the Port Stephens area of New South Wales in Australia, the 18-hole Pacific Dunes Golf Club is the focal point of a multi-million dollar golf and residential development.

Architect James Wilcher, a former member of the Greg Norman design team, laid out the Pacific Dunes course and it opened in 2005, around the same time as another of his acclaimed creations, The Cut in Dawesville, Western Australia.

The par-72 layout is blanketed by exquisite Santa Ana couch fairways and pure Bentgrass greens, which are both encased by a thick collection of Angophoras and Swamp Mahogany trees. And, despite stretching to 6,403 metres from the tips, Pacific Dunes  Golf Club still manages to feature a collection of spectacular short par-4s, including two of less than 300 metres.

The 1st hole extends just beyond that mark at 331 metres and, somewhat surprisingly, is ranked as the layout’s easiest hole. But, like any good golf course, it captures the spirit of the entire property and provides an enjoyable introduction of what’s to come. A lateral water hazard splits the fairway from a tremendous shared green that also attracts tee shots from the stunning 5th hole, which is one of the better designed par-3s you’re ever likely to encounter.

Club selection is likely to prove challenging at the par-4 3rd hole. At just 297 metres, the safe play here is to send a 3-wood or a well-struck hybrid down the left side of the fairway. But a better angle into the green is available if you bring out the big stick and take on a collection of menacing bunkers. This is a classic example of a well-designed short par-4 that asks you to ponder risk versus reward.

Now, back to that par-3 5th hole. At 183 metres – and from a slightly elevated back tee – you’ll most likely hold a long-iron or hybrid as you ponder one of the course’s prettiest designs, which doubles as one of the most challenging one-shotters during the round. That shared green from the 1st is back in play and is protected by water to the right, while deep bunkers guard it everywhere else. Correct club selection is vital to avoid the water and the sand, with the latter leaving a delicate shot to hit back towards the water.

The longest hole on the course comes in the form of the 555-metre par-5 6th hole, which feels incredibly secluded and features one of Pacific Dunes’ more undulating fairways. You’ll need to avoid the deep greenside traps if you want to break par here.

Pacific Dunes’ signature hole opens the back nine and it is one to remember. At 288-metres from the back, the 10th is the shortest of all the two-shotters on the layout but it is no pushover. A creek bisects the fairway about 150 metres off the tee and then winds down the left flank of the fairway and into a lake that abuts the front of the diagonally placed green. A tee shot short of the lone fairway bunker is key to getting in a good position to approach the green. Standing over your wedge here is a real test of nerves and it takes some doing to exorcise thoughts of hitting a fat pitch into the water.

First-time visitors will either love or hate the 482-metre par-5 11th hole, which forces most players to hit something less than driver from the tee as a pond cuts deep into the fairway from the right, significantly narrowing the landing area at the 240-metre mark. With wetlands stretching down the left edge of the fairway, there is little choice but to ease back from the tee and just get your ball in play. The pond is also quite discrete too, something this writer found out the hard way as I hit a good shot down the middle only to lose it in the hazard.

Water plays a prominent role on the back nine at Pacific Dunes, with every hole – with the exception of the par-3 14th hole – having a lake or wetland flanking a fairway or green. That said, the fairways are generally quite wide so the water shouldn’t come into play too often, hopefully …

The 13th hole is the hardest on the card. And for good reason, too. At 392 metres, the par-4 runs alongside a lake to the right for the entire journey between tee and green. Although a good tee shot is extremely important here, it’s the approach into the green that has earnt this hole its reputation. Miss left and you’ll find a bunker, while anything right or long will produce ripples. A par on your card here should be celebrated.

Kangaroos abound at Pacific Dunes, and there are usually droves of them waiting to greet you at the 16th tee, which is, for mine, one of the best on the course. The slightly elevated tee leaves no surprises and it is an intimidating drive to a dogleg left fairway with water left and right. Skirting the lake to the left with your driver will leave a shorter, more direct, approach into the green of this 382-metre hole. Tall stands of gum trees surround the sublime putting surface, which lies just beyond two bunkers that will catch the poor approach.

The 486-metre par-5 18th hole provides one final examination of nerve and skill. Although it is Index No.7 on the card, this writer found it to be one of the most challenging holes at Pacific Dunes. Like so many before it, the tee shot here is of the utmost importance. A wide fairway begins to bottleneck at the landing zone, and water stretches all along the right side for nearly 400 metres, right up to the front of the green. While the green is one of the largest on the course, it’s perched just above the waterline while three bunkers can be found left and long of the wide putting surface. 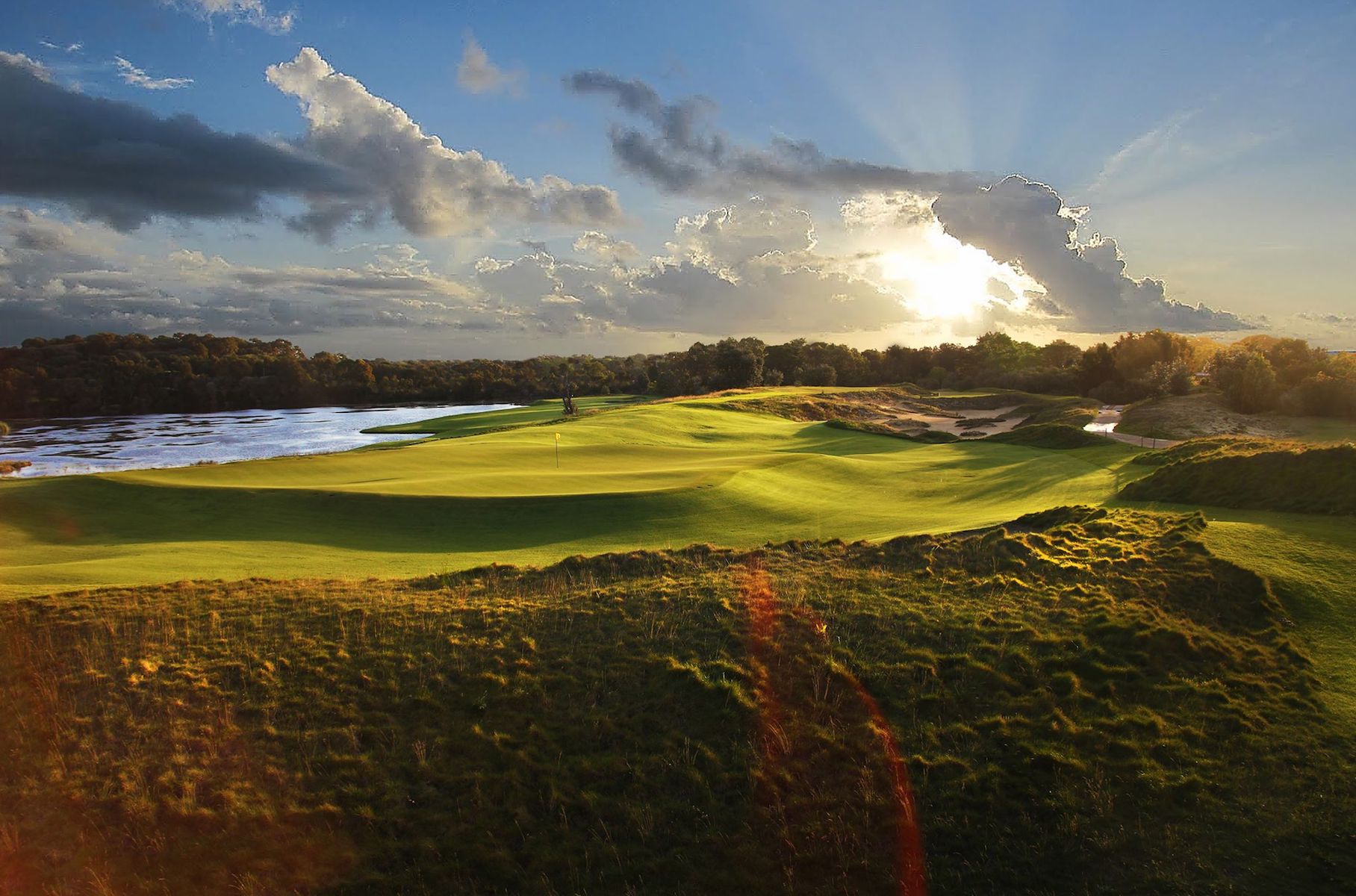 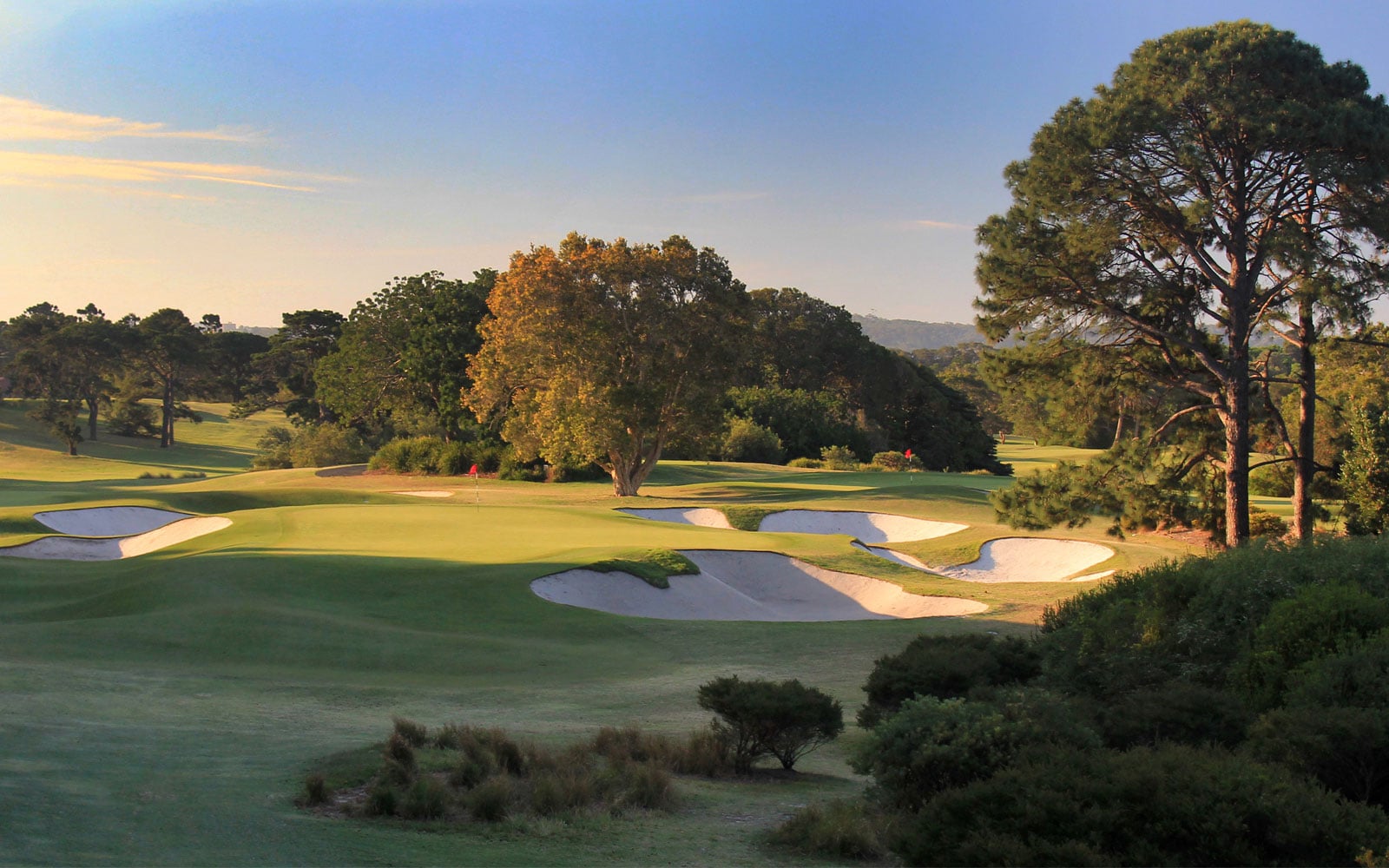 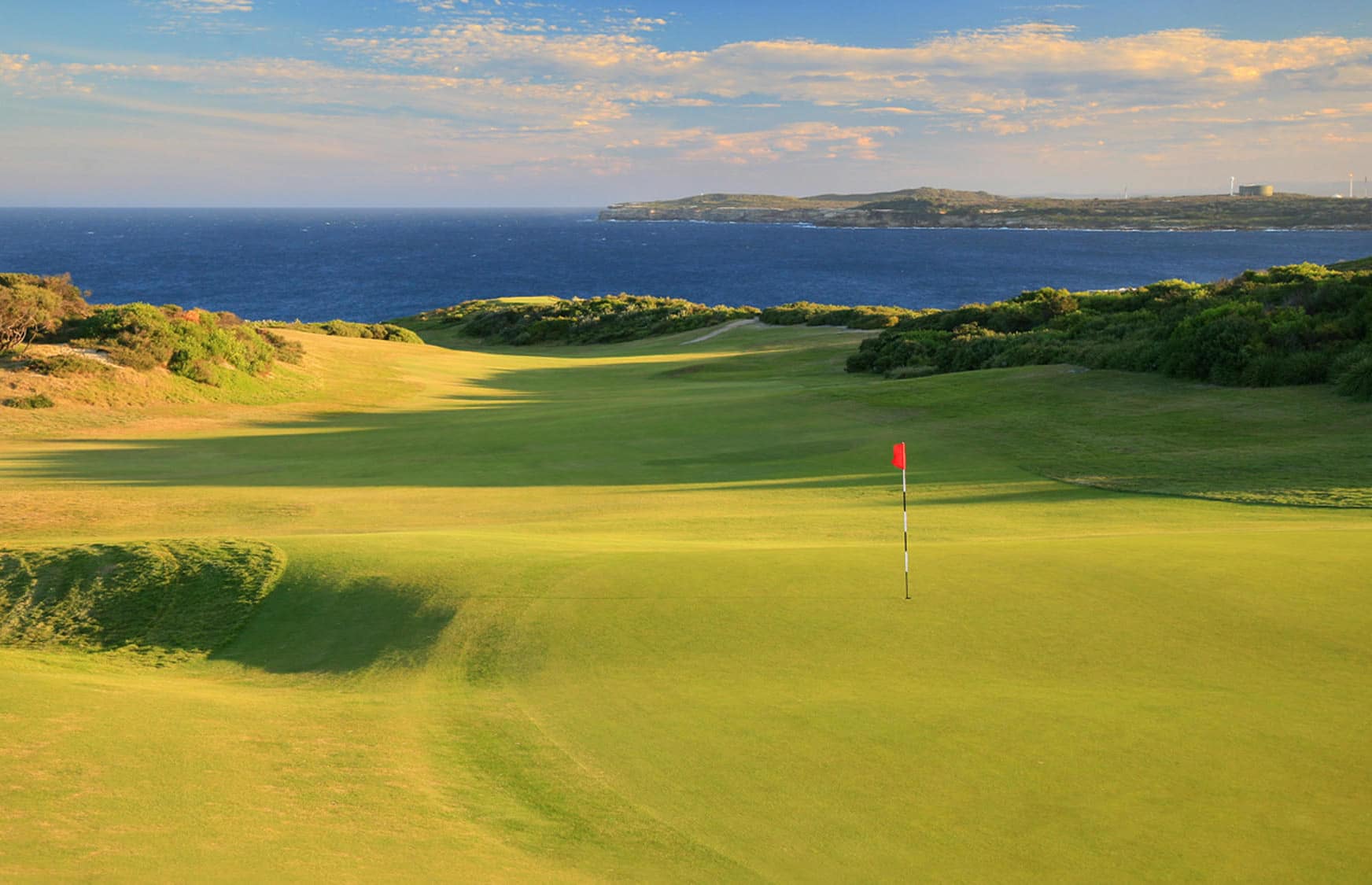