A winning blend of natural beauty and golfing adventure, the three championship golf courses at Gleneagles are regarded among the very best golf courses in the world. The inspiration of two of the greatest names in the game, five times Open winner James Braid and the Golden Bear himself Jack Nicklaus, the courses offer tantalising challenges for all levels of player.

Gleneagles’ reputation as a sporting estate has flourished for nearly a century, and golf sits at the very heart of that rich history. With three world-class championship golf courses Gleneagles was recognised by Golf World magazine as the No1 Golf Resort in Britain and Ireland – The King’s is the No.1 inland course in Scotland as ranked by Golf Monthly , The Queen’s, one of the finest par-68 golf courses in the UK and The PGA Centenary Course, Host Venue of The 2014 Ryder Cup and 2019 Solheim Cup – the venue attracts a spectrum of enthusiasts, from complete novices through to international golfing aficionados, corporate guests and world-renowned celebrities.

Located in the heart of Scotland, just one hour from both Glasgow and Edinburgh airports, Gleneagles is ideally located for golf breaks in Scotland. Boasting 54 holes of championship golf, plus an enticing nine-hole, Par 3 PGA National Academy Course, it is understandable why the venue has staged some of the game’s most prestigious events. We are open to all levels of ability and welcome visitors 365 days a year.

King’s Course: 18 holes, 6471 yards, SSS/par 70
For golfers who think blind shots are only a phenomenon on a links, try a spin on the wild and wonderful King’s Course at Gleneagles.

The King’s Course, a heathland layout by James Braid that dates back to 1919, rides the natural ridges and fall lines of glacier-cut hills. Some of the movement is so severe that blind shots are inevitable. The best example is an intimidating wall of green grass guarding the hidden third green. Only an aiming post gives the indication there’s golf to be played on the other side of the climb.

Other similarly interesting holes stock the King’s, which hosted the Bell’s Scottish Open eight times. The first hole rises skyward to a green located a three-club difference above the fairway. The par-4 seventh hole sling-shots left over a pair of bunkers. Ten protectively placed bunkers aim to block golfers from driving the 14th green on “Denty Den.”

The resort’s new owners have invested heavily to restore the King’s to the look and style Braid intended. Rough has been shaved back and fairways widened to encourage a ground game similar to links golf. Greens have been enlarged to their original shapes and fairways realigned to bring bunkers back into play. The new look is actually nearly a century old. The King’s will celebrate its centenary in 2019.

Did you know that the King’s hosted the first match between British and American professionals in 1921, a precursor to The Ryder Cup? That’s how historically significant this special course is.

The natural wooded beauty of the Queen’s Course, with its lush views over rolling hills and great, wide skies, inspires even the most experienced of players.
It might be the shortest of the three Gleneagles 18 hole courses, but Queen’s should no be underestimated. With plenty of dog-legs and greens hidden away, accurate play from the tee is essential. At 3,192 yards long, the challenge of the front nine can prove deceptive. Even some of the best players find it a challenge to make par into the famously fresh south-westerly breeze.

Top golfers Johnny Miller, Greg Norman, Seve Ballesteros, Tom Watson, and Lee Trevino have all battled with this course’s famous complexities. As have household names such as Sean Connery, Burt Lancaster, Bing Crosby, Jackie Stewart and Alan Shepard, the astronaut who managed to hit a golf shot on the moon.

PGA Centenary Course: 18 holes, 6559 yards, SSS/par 72
The PGA Centenary at Gleneagles is the course that Jack Nicklaus built, so it goes without saying that this is an American-styled layout.
The PGA Centenary (formerly known as the Monarch) opened for play in 1993 and it’s a big stadium course. In fact, it’s the longest inland course in Scotland, measuring a nearly 7,300 yards from the back tees. There are five tee boxes to choose from, so select carefully to ensure maximum enjoyment. Even if you’re not buggy lovers there are some long walks between the greens and tees. If the PGA Centenary is your second round of the day at Gleneagles, a buggy comes highly recommended.
“The finest parcel of land in the world I have ever been given to work with,” was how Jack Nicklaus described the rolling moorland. This is Nicklaus’s first and only design project in Scotland and he’s done a fine understated job. Only a couple of holes feature water hazards, and these are for practical, irrigation reasons rather than for effect. The PGA Centenary definitely complements, but also contrasts markedly with the King’s and Queen’s. The usual Nicklaus features are in place – huge undulating greens, bold bunkering and, of course, a number of risk and reward holes.

he key to scoring well on the PGA Centenary is to avoid coming up short with your approach shots. Invariably, much of the trouble is at the front of the greens, so take enough club. The best holes are those adjacent to the King’s course and the 5th is a cracker. The long par four is called “Crookit Cratur” and it’s a fun rollercoaster of a hole with a bottle-necked entrance to the green. The 9th is also superb – a par five which has trouble in the shape of water and bunkers (one of which is huge) lurking down the right.

Clubs for hire
Trolley for hire
Golf cart for hire - £60 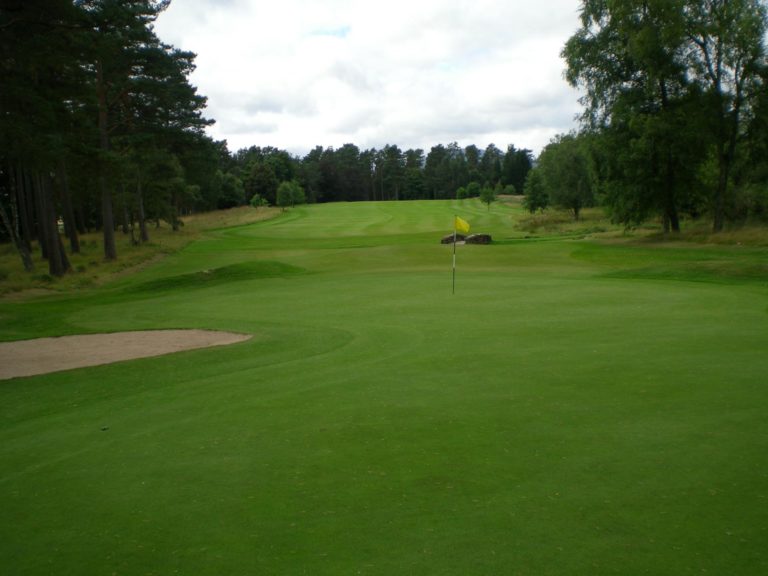 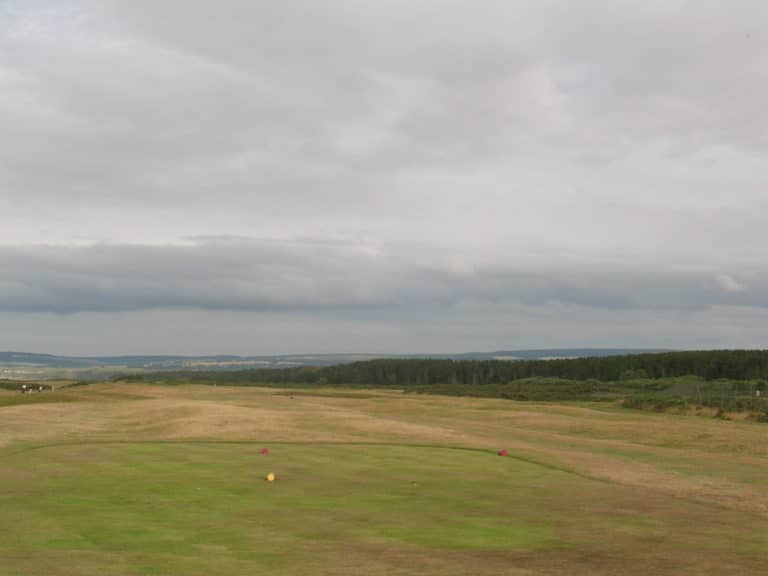 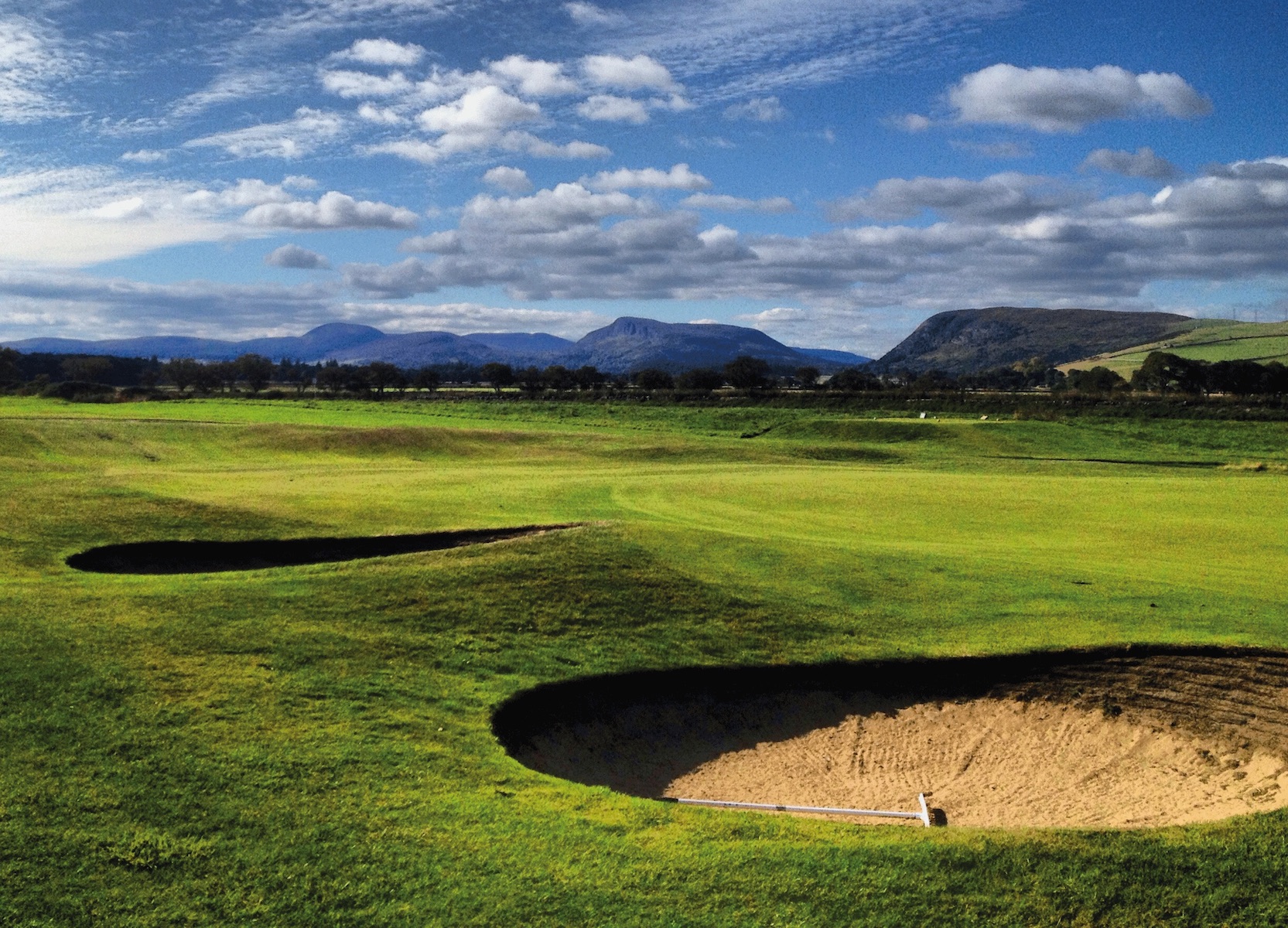